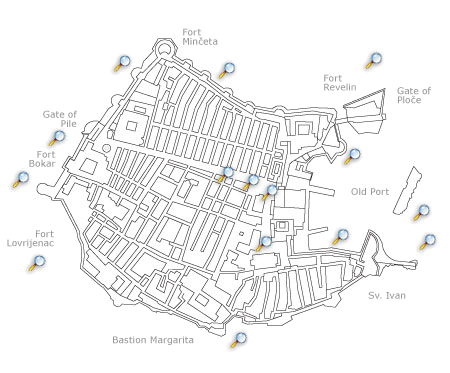 established in the 13th century and were systematically and continuously perfected over several hundred years, until 1660, when the last of the towers, the St. Stephen’s Bastion, located at the southern part of the walls, was finished. The walls stretch over 1940 m (6365 ft.) and consist of the main wall, sixteen towers, three forts, six bastions (bulwarks), two corner forts (cantonatas), three pre-walls with several turrets, three moats, two barbicans, two drawbridges and one breakwater. Among the many known and unknown builders of these structures we shall name but a few – Paskoje Miličević, Nicifor Ranjina, Marin Držić, Župan Bunić, Miho Hranjac, Juraj Dalmatinac, Michelozzo di Bartolomeo Michelozzi of Florence, Onofrio and Simeone della Cava, Antonio Ferramolino of Bergamo, Giovanni da Siena, Bernardino di Parma, Marcantonio Bettaci of Florence, Seporoso Mateucci of Fermo and Giovanni Baptista Zanchi of Pesaro.

Analysis of the Dubrovnik city walls in the context of the era they were built, of their development over time and design leads to the conclusion their form was defined by weaponry and battle techniques of the past. The very first walls were built at the same time the first settlement was erected; their foundations set on a high rock easy to defend, difficult to reach and ideal for observation of the surrounding land and sea. The city, build on a shore, was from its beginnings protected by the sea as well, preventing surprise enemy attacks. The walls, built in sturdy stone mined from nearby locations, did the rest, enveloping the city in their solid arms stretching for miles, giving inhabitants a safe and secure place to live.